The End, the Change Conversations about transformation in Lodz after 1989. 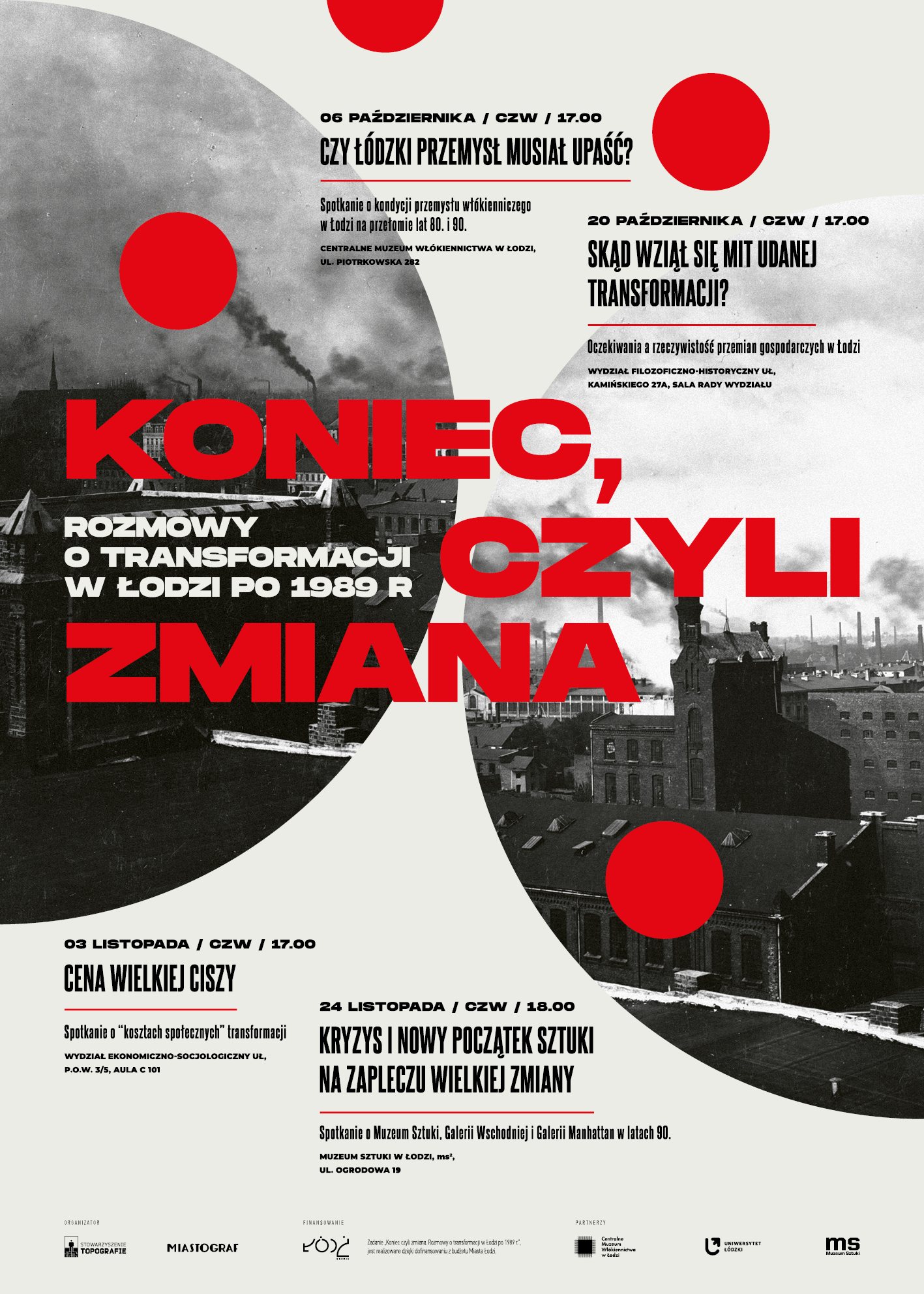 The Topographies Association, together with its partners, invites you to a series of debates about the effects of the political transformation in Lodz.

It has been more than 30 years since Poland embarked on the path of systemic transformation, a difficult change spread over years that included a rapid reconstruction of the economy as well as society as a whole.

Łódź, an industrial giant and the second largest city after Warsaw, has been particularly affected by the transformation changes. The liquidation of industry, unemployment, urban shrinkage and broken social networks do not fit the story of a successful path to the free market and democracy.

Why and how did Lodz's industrial plants collapse?

A series of four meetings around the Lodz transformation brings together the voices of scholars and researchers in an attempt to answer these difficult questions.

In addition to the substantive debate, the audience will have the opportunity to receive a unique publication. Each person who participates in a minimum of 3 of the 4 debates will receive the book "Great Industry, Great Silence. Lodz Industrial Plants 1945 - 2000", which was published by the University of Lodz Press and the Topographies Association in 2020. The book received University of Lodz for co-authored book in 2021 and the Gold Exlibris 2021 for the best book about Lodz in the year 2021.

Did Lodz Industry Have to Fail?

Meeting #1 about the condition of the textile industry in Lodz in the late 1980s and early 1990s.

The main purpose of the meetings will be, above all, an honest assessment of the events, without getting entangled in ideological disputes. The first will be devoted to assessing the state of industry in Lodz and its role in the late 1980s and early 1990s. What was the condition of industrial plants? What functions did they perform, and were they purely economic? Was privatization necessary? Was it prepared properly? To what extent has the role of Lodz changed on the map of Poland? These are just some of the questions we will try to answer.

Where Did the Myth of Successful Transformation Come From?

Meeting #2 about the clash between reality and expectations in relation to the economic changes taking place in Lodz in the early 1990s.

Faculty of Philosophy and History of the University of Lodz, Kaminski 27A, Faculty Council Room 20/10, Thursday 5 p.m.

In the late 1980s and early 1990s, public expectations of political and economic transformation were high. Meanwhile, the course of the latter in particular ended in the rapid deindustrialization of the country, which was particularly evident in Lodz. Despite this, numerous commentators still maintain the view that the transformation was successful, and the subject itself stays uderstudiedstudied by both historians and economists. During the debate, together with the speakers, we will try to find the reasons for this state of affairs.

Price of the Great Silence

Meeting #3 about the "social costs" of transformation

Behind the notion of the "social cost" of the transformation is a more or less hidden assumption about the inevitability and inalienability of the path of transformation adopted by the Polish authorities back in the 1980s. The "shock therapy" was spoken of and is still spoken of as if it were a bitter but necessary remedy. Setting up the discussion in this way, promotes pushing the experiences of entire social groups outside the bracket of a "rational" argument about the legacy of systemic transformation. We also lose the element of political causality from the horizon, forgetting that the way the costs of political and economic reforms were socialized, was the result of a tangle of decisions and omissions, based on very clear ideological assumptions.

During the discussion with the participation of invited experts, we would like to look at the achievements of social research on systemic transformation in Lodz.

Crisis and New Beginning of Art on the Back of the Great Change.

Meeting #4 about cultural and art institutions on the back of transformation.

Analyzing the changes that occurred in the 1990s in the ways of describing reality, we can see quite rapid and radical shifts also in the language of describing culture and its functions. Museum resources were no longer spoken of as "common property of the nation," and culture had to "start counting" in many other ways, including literally - converting everything into zlotys. In the reality of the disappearance of stable state patronage, economic and social collapse and changes in management patterns to those implemented from business, even reputable state institutions, such as the Museum of Art in Lodz, experienced destabilization. Things were even different in the case of the Eastern Gallery (in operation since 1984) or the Manhattan Gallery (established in 1991), run thanks to community involvement.

During the discussion, we will start with a case study of these few places and the people associated with them, important on the cultural map of Lodz, in order to get a broader picture of the transformative changes. How were they perceived and absorbed by what several decades later is described as the "cultural sector"? 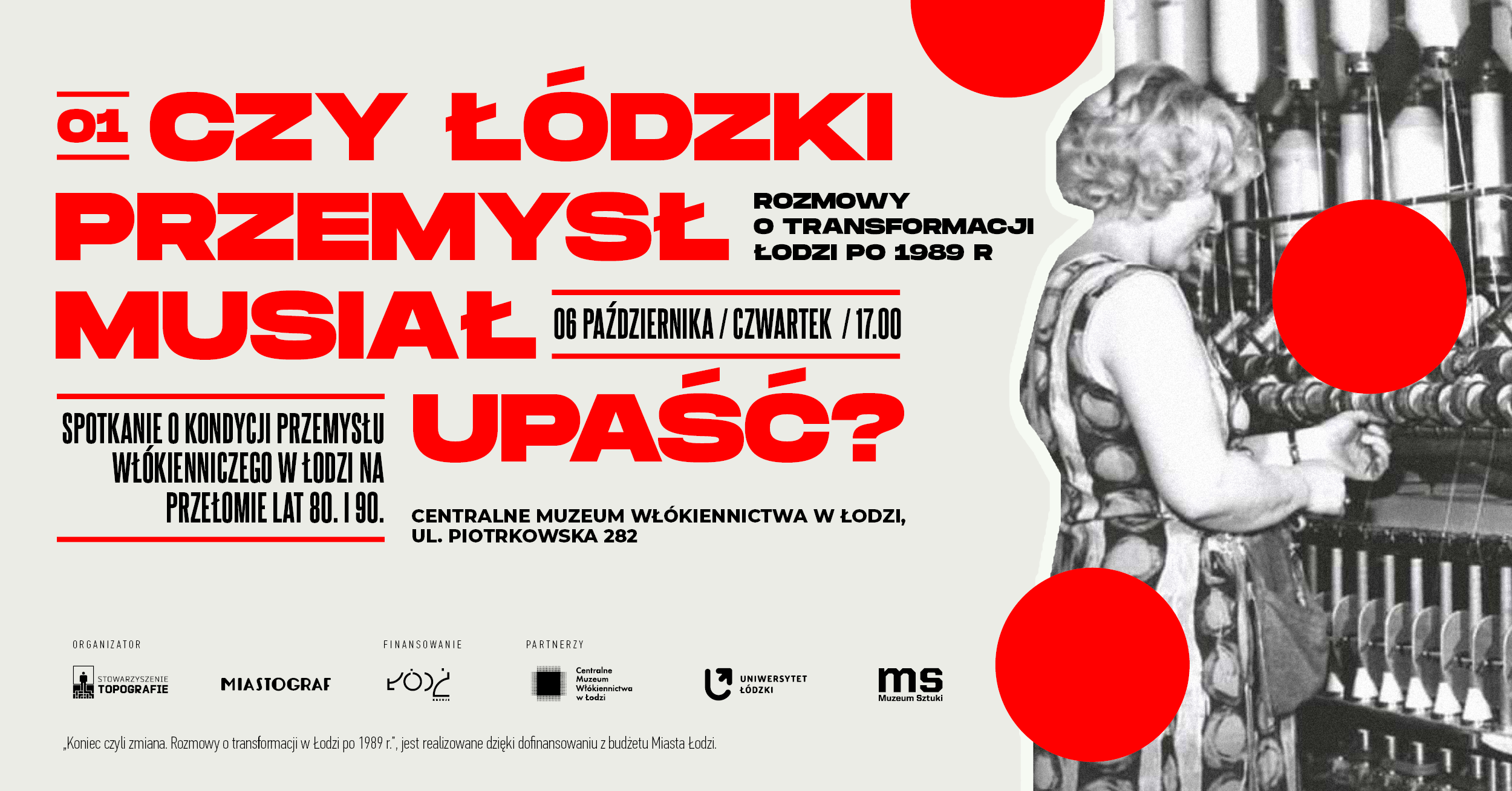 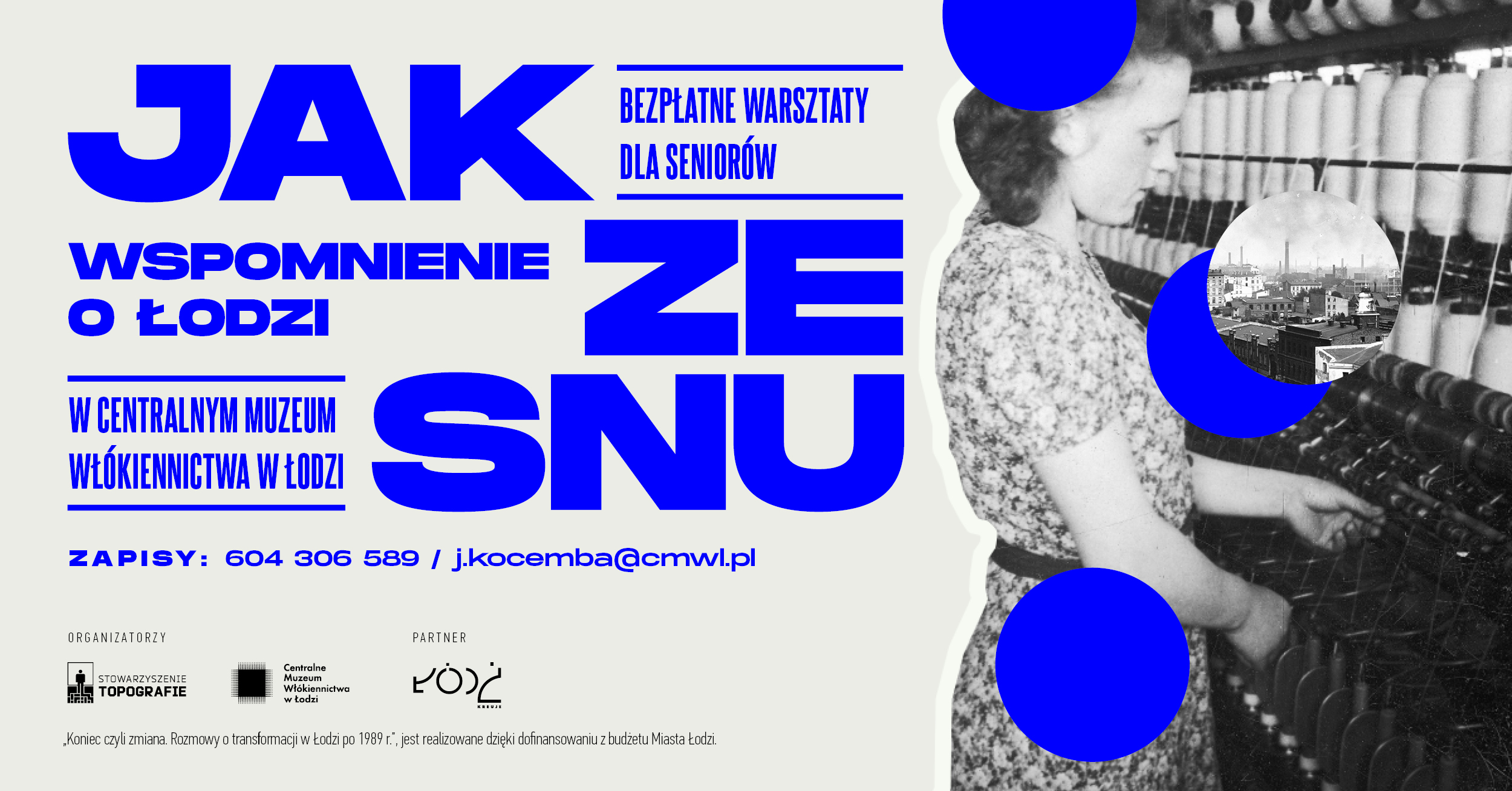